For another exciting yet informative read, I’ve decided to write about Battery Distribution Systems, mostly because I recently made a major switch, but also because I’ve tried a few and have an opinion about them. I’ll also touch upon batteries, since they are also important to this scenario. 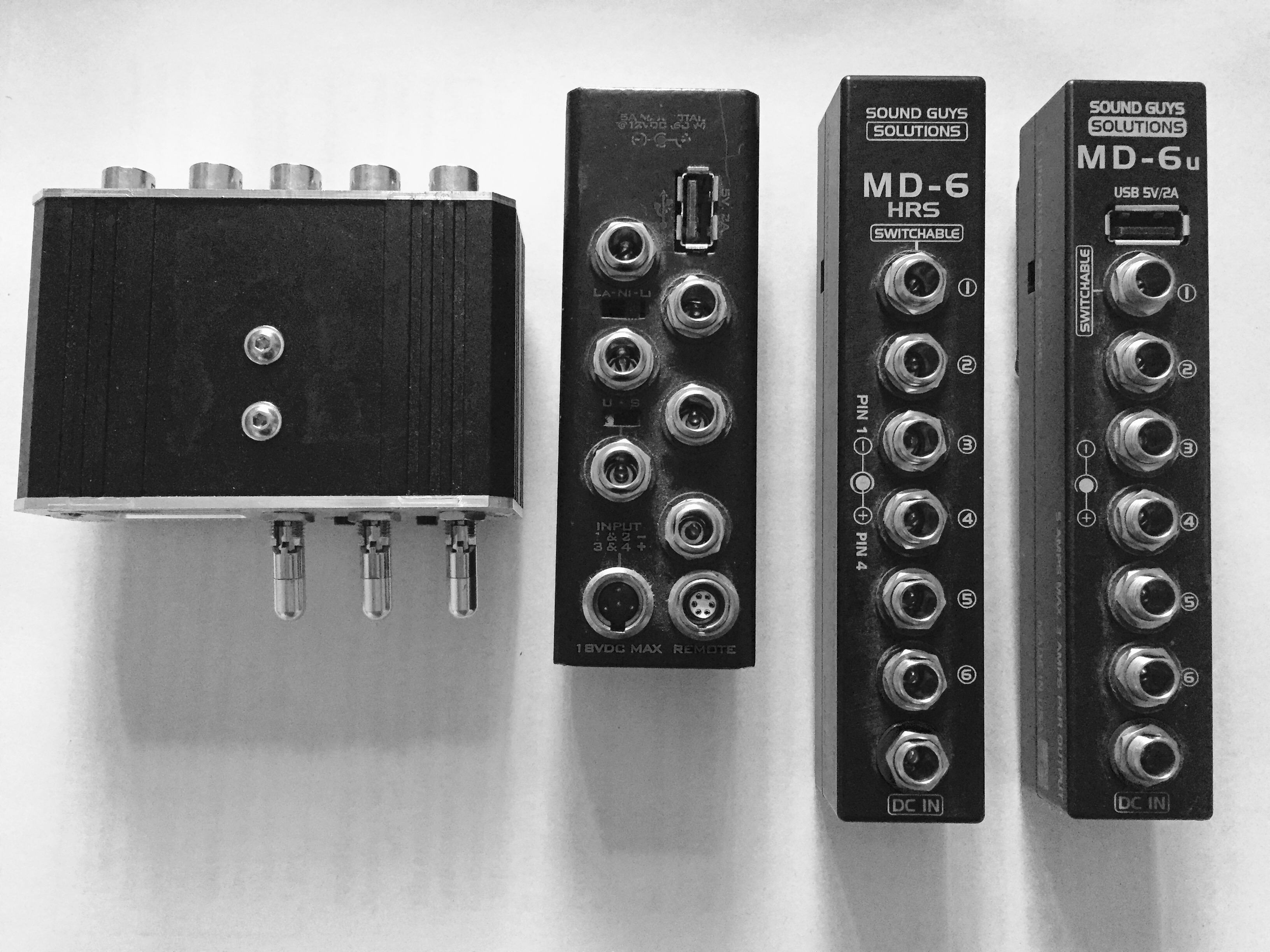 I first purchased a Remote Audio BDS4u, which was the version with the USB plug. That was nice because I could charge or power a device from it. I also really liked the Volt Meter that you could buy for it. It’s power input plug is a TA4 plug which is also what the similar PSC product uses. (Note: PSC and Remote Audio BDS units are nearly identical, so aside from RA’s accessories, I don’t know what the difference is) Remote Audio actually made a whole line of power distro products that were really cool, and useful in a lot of ways. By far my favorite was the Hot Strip, which is really useful for cart building. Unfortunately they stopped making them, which is a real shame because they are a hot item. 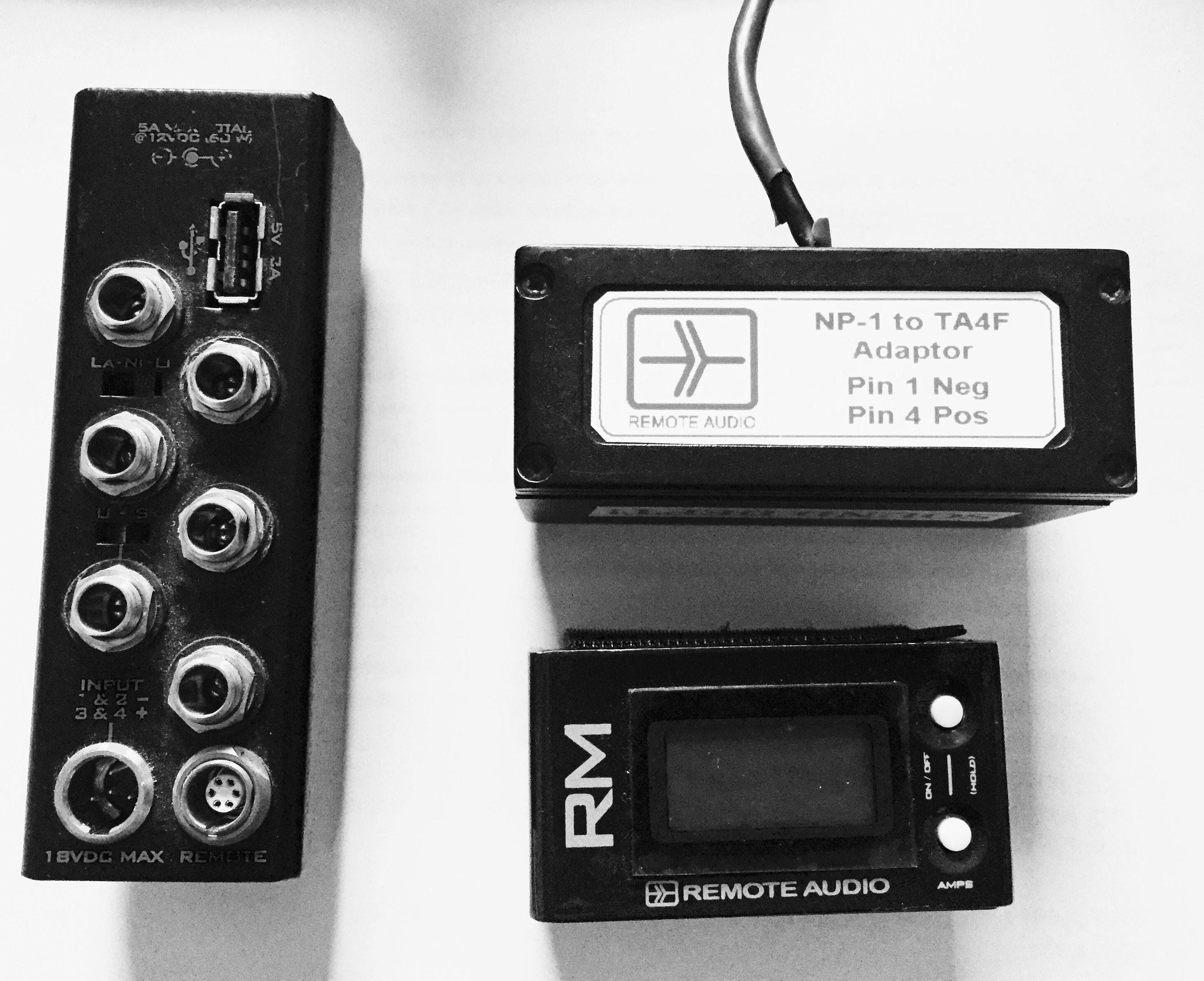 Although the BDS4u works very well and has some cool accessories, what I never liked about it was the staggered power outputs. When you need to get at these, it is always when you are in a jam, and it is buried in your bag. I have dainty lady-fingers and still have trouble tightening and unscrewing these things, which is what made me switch to my next choice. 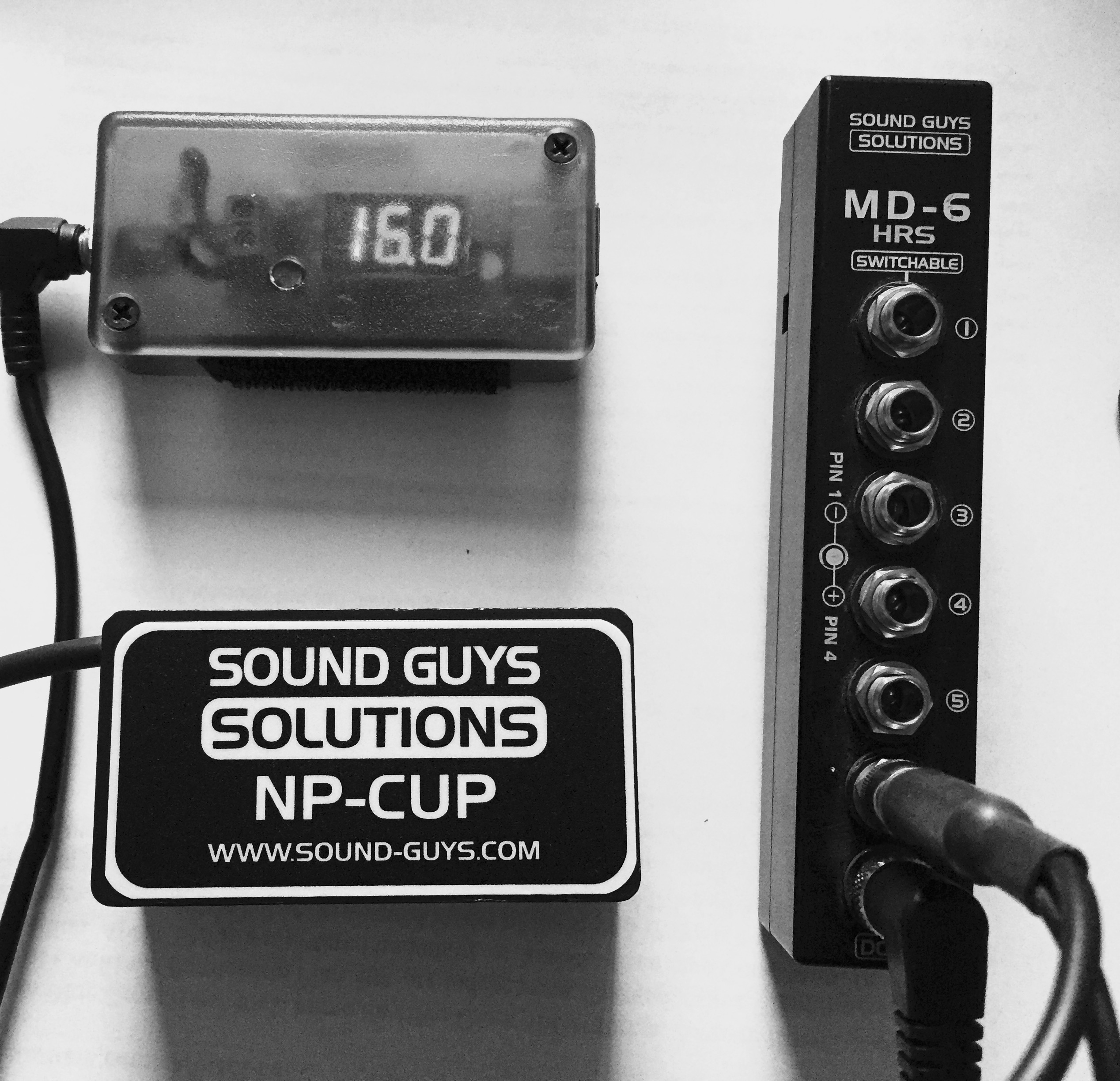 The Sound Guys Solutions (SGS) MD-6 is awesome because it takes advantage of the vertical space of the bag, and lines up all outputs for easier manipulation. It also comes in the traditional screw-locking connectors, as well as Hirose. It’s power input is a screw-locking connector, so if you are powering your system with something other than an NP-1, you’ll need a custom cable termination. The first incarnation of this BDS (that I was aware of) had no USB port. However, it has a remote jack that could be used to measure the power from. So I made my own Volt Meter so that I could monitor my batteries status. I eventually made another Volt Meter (pictured) with a USB port for powering/charging purposes, after following a DIY thread online. This Volt Meter had to be powered by one of the outputs, but I never asked Gene Martin, genius behind SGS products, if the remote jack could also power anything. Either way, I find that BDS’ provide enough outputs to power anything you’d ever need in a bag, especially when you can use splitter cables to power low draw items.

Once Gene made available a BDS with an USB port, I purchased one as a backup, and kept it in my kit that goes out with me ever since. It has been useful for a number of makeshift scenarios, and I don’t think I’ll part with it any time soon.

At this point I had seven IDX NP-L7S batteries, which I had accumulated for powering my massive sound bag at the time. But eventually I scaled down the bag, and after a while some of the batteries started to show their age. NP type batteries are large and work well, but are certainly a remnant of the past. At $220 a piece, they become an expensive item to purchase and maintain. I had three beginning to lose charge at the same time, so a $660 replacement meant that I could think about other options. 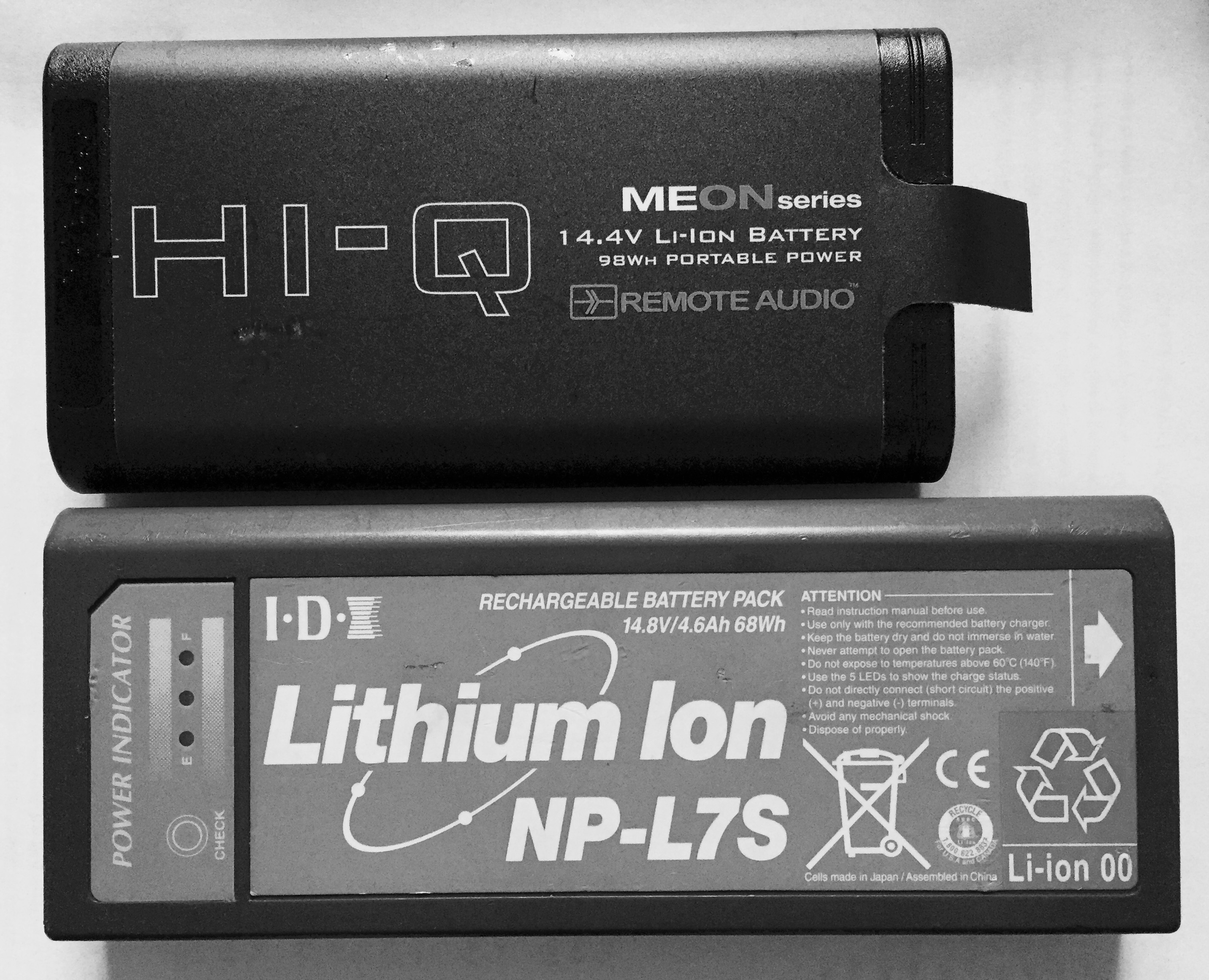 The new “smart batteries” available, made by Inspired Energy, are high capacity, slimmer, and can give you detailed information about their status. Best of all, they are a lot cheaper! They are mainly used for medical applications from what I understand, but AudioRoot has adopted them for Sound. Since then, Gene at Audio Dept decided to start carrying the generic IE versions (which are the same and cost less because they don’t have the AR sticker on it), and Remote Audio began branding them for themselves as well. All in all, you can get a 98wh battery for around $160. The popular IDX NP-L7S is 68 or 71wh. To me, buying three batteries with higher capacity was a no brainer. Three IE batteries cost about $480, and the cost of a battery cup is about $60. Still more than $100 less than new IDX batteries. 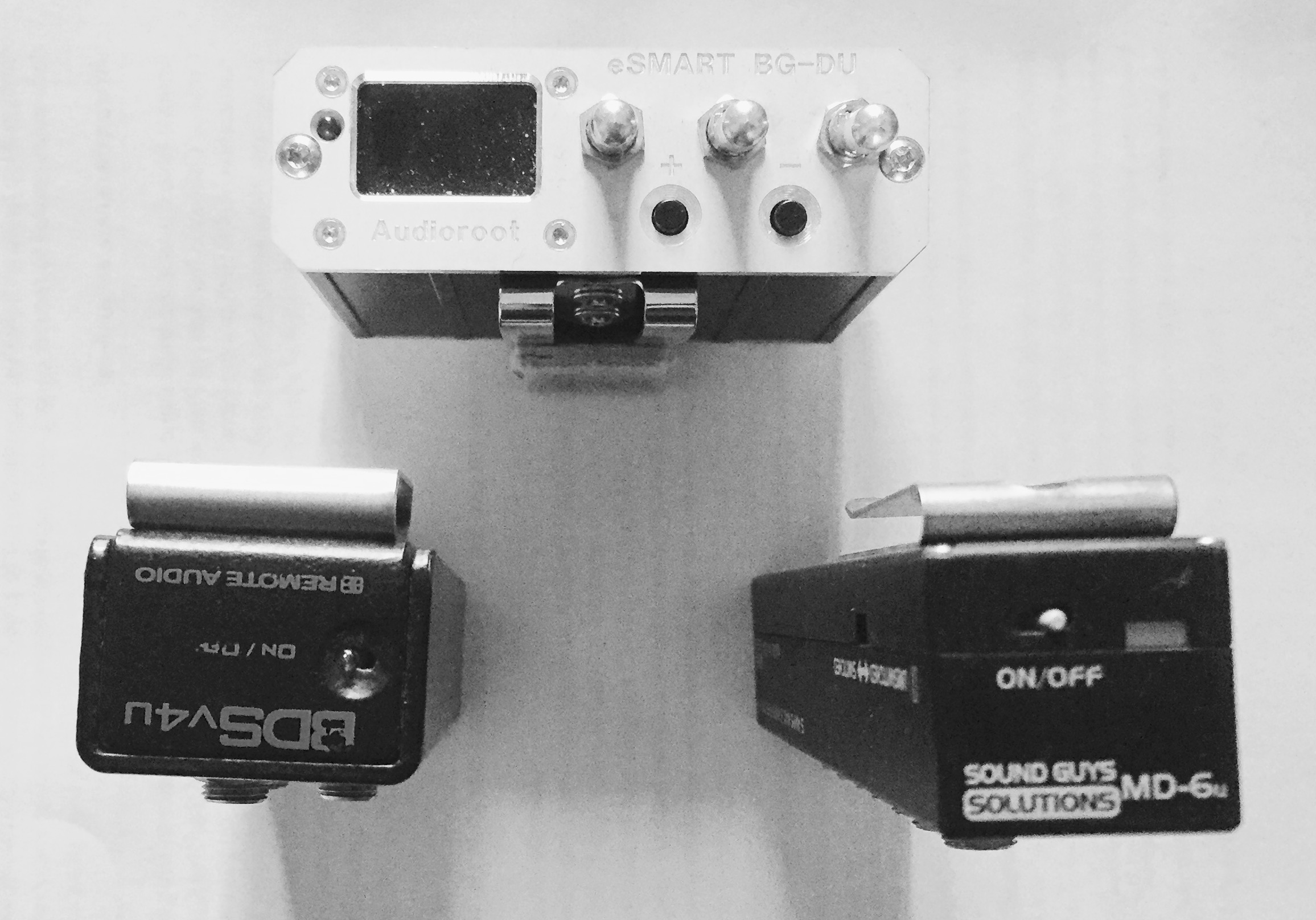 At this point, I decided to go all the way and get an AudioRoot BDS. I originally purchased their newer vmDBOX, because I really just wanted a large Voltage readout, and wanted to stay with the screw-locking connectors, because I was already well invested in those cables, and had plenty of custom cables. As luck would have it, this model requires a different size locking connector, so every cable would have to be custom! A very bad move for AR because they could really sell a lot of these to people looking to switch form factors without having to replace all of their cables. The other option for this model, the vmDBOXhrs is Hirose, however for whatever reason none were readily available when I was looking to buy. The next step up has a smart readout, but a hard-wired battery cup. That is another mistake, which made me decide against going with that model. 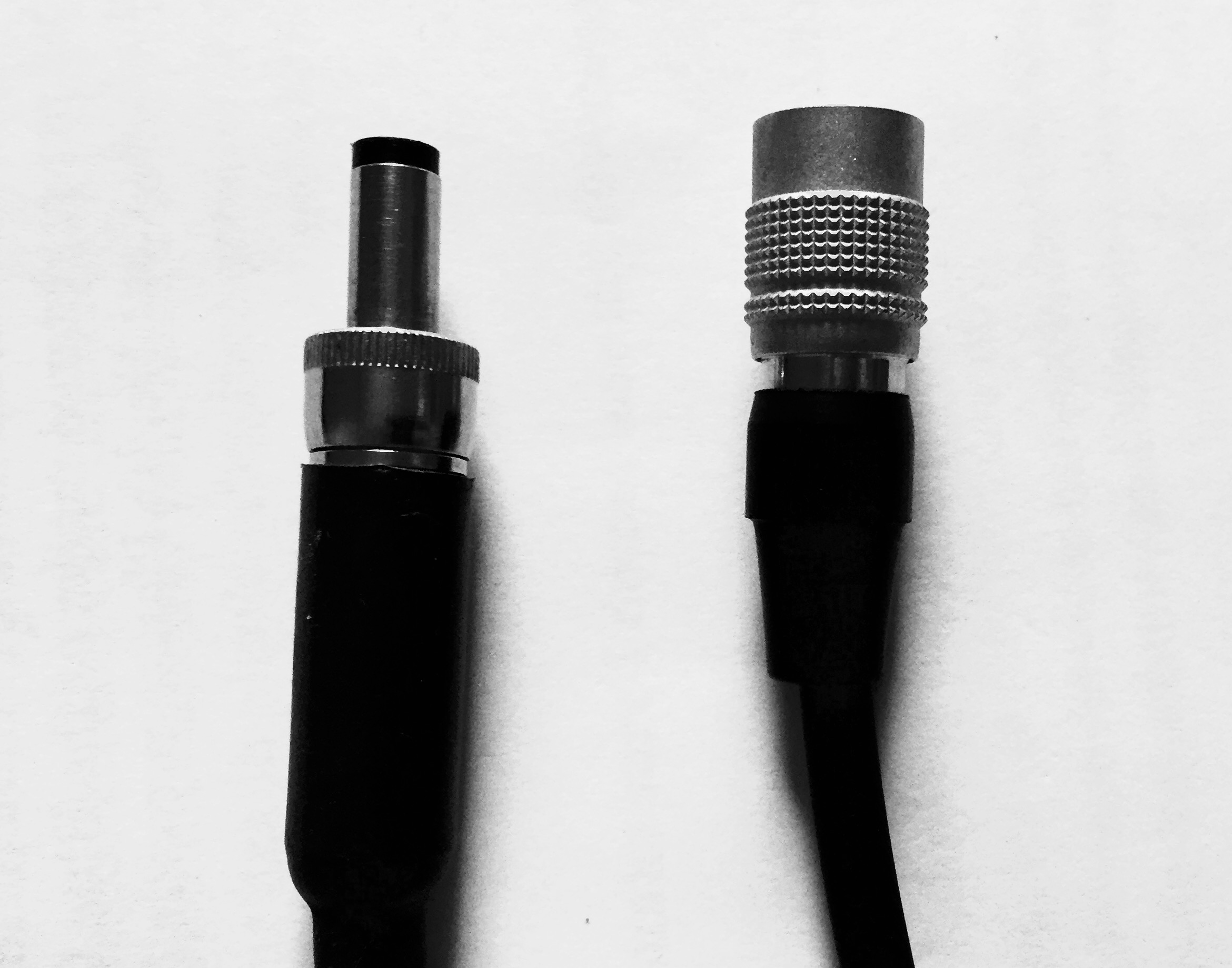 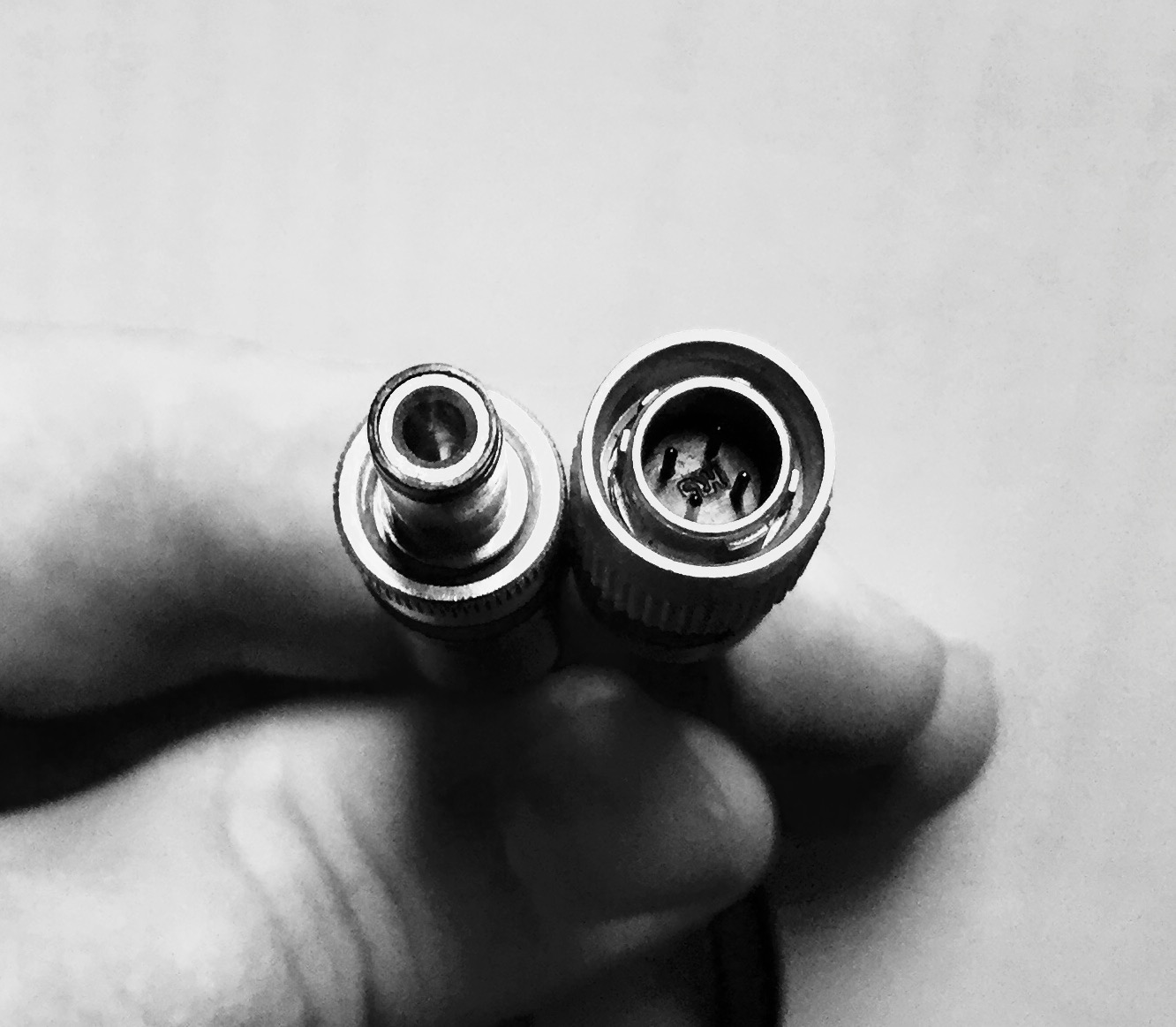 Soooo I went with the oversized BG-DU, with the smart readout and the Hirose connectors. The readout doesn’t display the Voltage as large as I’d like, but it does have a graph showing my batteries status. It is also only available in Hirose, which means that I had to buy all new cables, and have all of my custom cables re terminated. It was an expensive switchover in the end, but I’ll tell you why I did it. 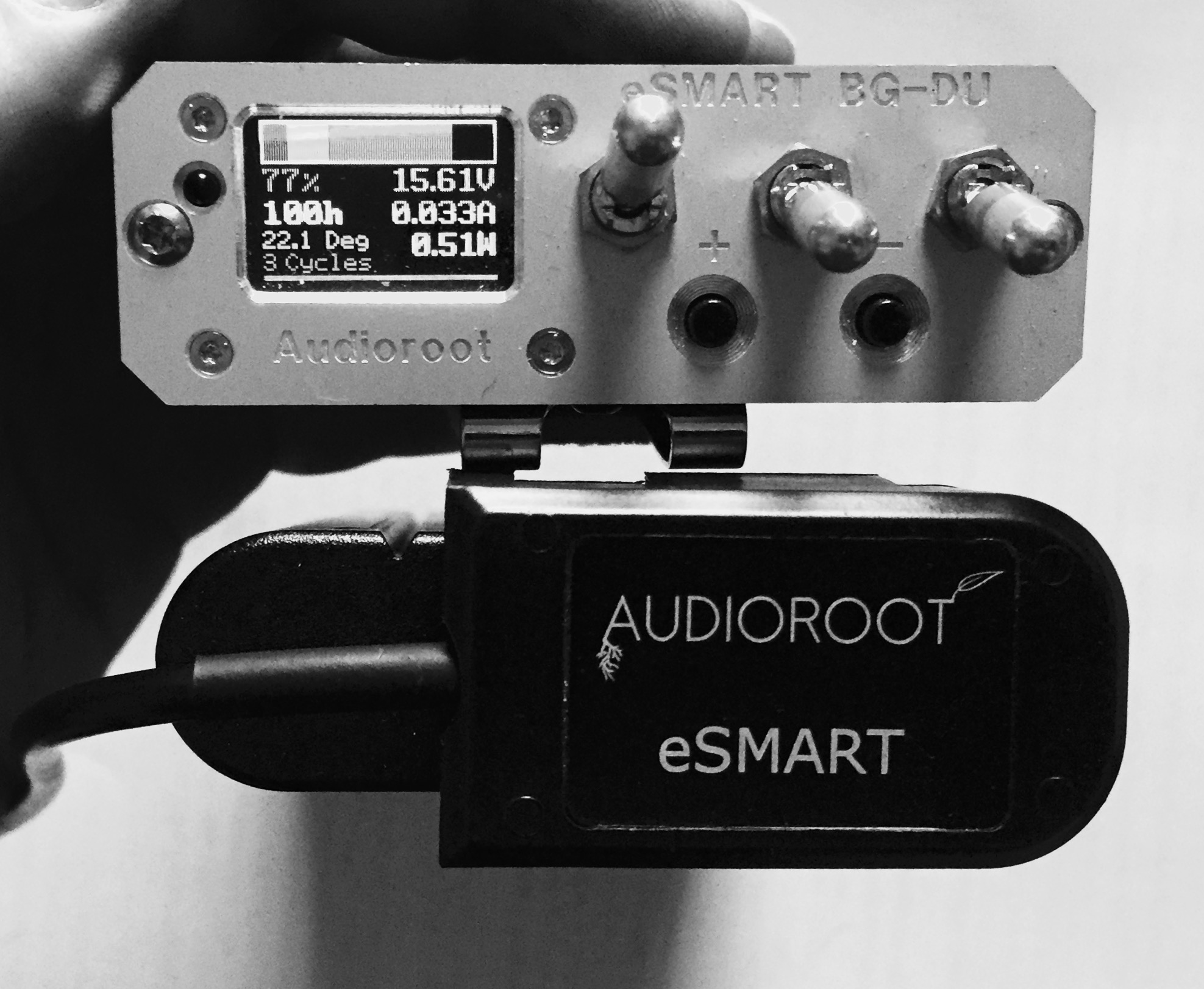 Yup. Cable Direction. With PSC, Remote Audio, and SGS, the cables all come out at a right angle from the distro box. This means that unless your bag is barren and spacious, you are probably putting a lot of stress on your cables (and they are taking up twice the space of the BDS), and if you are like me, and like having a Volt Meter, you are taking up double the space in order to keep track of your power supply. Like the RX Emergency Battery Bud, the AudioRoot BDS’ have their cables coming out of the back of them, facing down into the bag. No stress on the cables. And Hirose connectors means that they won’t come loose: a more secure connection. All in all, a double win. USB (not included in the AR systems) can be useful for various things, but I’ve never really needed it for my phone. Why? Well, as a responsible adult, I keep mine charged every day, and my phone case is a Mophie, which has it’s own battery in it. So if I do need to recharge my phone while on set, I can do it without draining my bag power.

So there you have it. My venture into BDS’ and why I’ve changed them over time. As usual, no system is perfect for everyone, but some people really like one over another for various reasons. This is my journey, yours should reflect your own needs and reasoning.

Your battery cup is another important part of it all, and as you can imagine, I’ve got to nitpick these as well. Back when I shlepped around a massive bag, I powered my 788T with it’s own NP-1, and had everything else in the bag powered with another via my BDS. For whatever reason, I had a PSC cup and Remote Audio cup. Both are still in use to this day (when I need to use these systems). Their drawbacks were at the cup. The cable would get pulled on and some of the wire would be exposed at the cup (pictured). The PSC cups logo plate would come loose in the heat. But otherwise, they worked pretty well. The SGS cup that I replaced them with once I went with the SGS BDS worked great, had a support tie built into it to relieve strain on the cable at the cup end, but the logo plate would come undone when the screws holding it in place became loose. Eventually the contacts on my first one lost contact somehow, so I replaced it. Once I went with the smart batteries, I was advised to use the AudioRoot cup, as it apparently has better contacts than the Remote Audio cup, though I never did try the RA cup. All in all, I got about five years use out of the PSC and Remote Audio NP cups respectively, and about two to three years out of my first SGS NP cup. Time will tell with the AudioRoot cup. 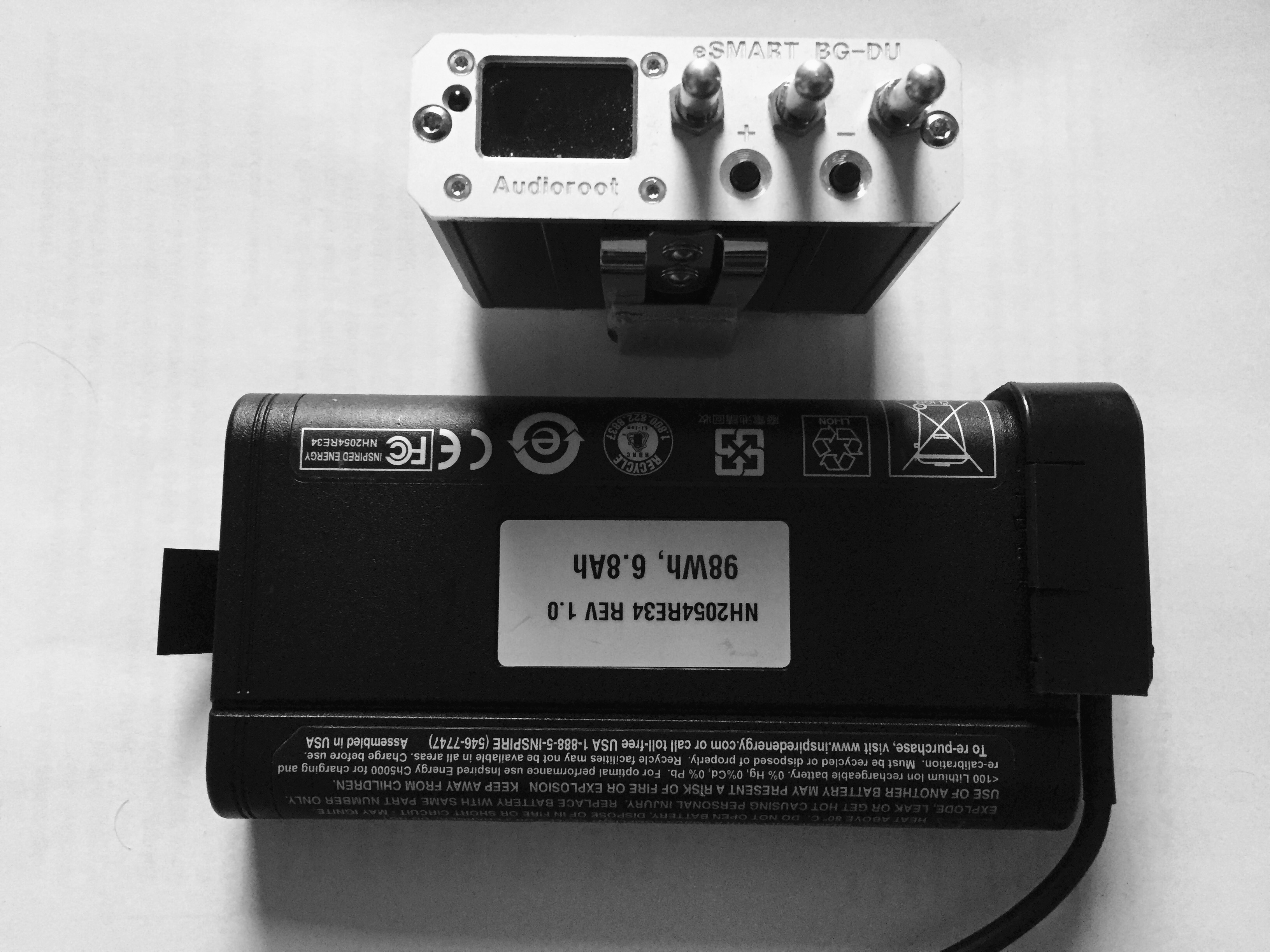 PSC has a newer BDS which includes a Voltage readout on top, and multiple power inputs on the bottom. I think it is a really cool system, but it is rather large, and still suffers from cables coming out of the face of it. However it’s versatility means that it can be extremely useful for a number of applications. I may be persuaded to buy one of these for a bag-cart project at some point.