A friend of mine began putting together a project studio after suddenly getting really into songwriting. I lent him my AKG Perception 200 large diaphragm condenser microphone. I’ve had that microphone for over ten years and probably only ever used it a couple times after I purchased it, so I knew it wouldn’t be missed.

Looking to eventually purchase his own microphone, he asked if we could compare some of my other microphones, to get an idea of what the differences are in characteristics and price. I gathered together some of my mics, and also asked a friend if I could bring along his vintage Reslo ribbon mic. 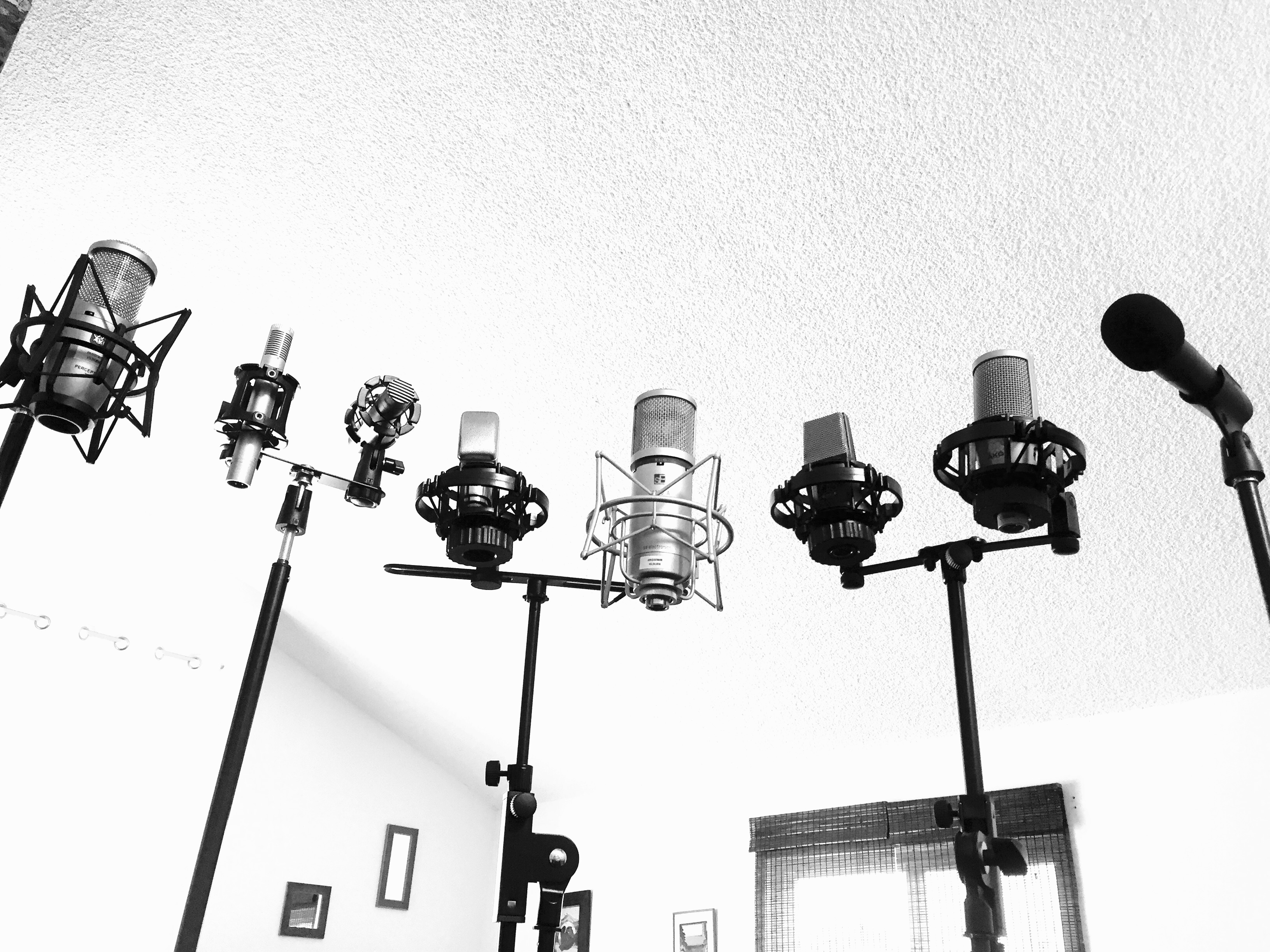 We set them all up at equal distance from a pop guard in a semi-circle, connected them to a Focusrite audio interface, and blasted 1kHz at them to set their gain to be receiving the same levels. The Reslo, being a hi-z mic, needed to be cranked pretty far to get a good signal. So it being the lowest in signal strength, we used what we could get out of it as the level we would set the rest of the mics at.

My friend then sang into the mics while they were simultaneously recorded. Afterwards we listened and began narrowing down which ones we liked. We cut the 57 because we pretty much knew what to expect out of it. The Se Electronics mic initially stood out prominently, but after careful listening, was cut from the list. It had a great open and detailed sound, and a real wow factor. The Perception 200 was cut because it tended to accentuate the parts of my friends voice that he didn’t like. Both Schoeps mics were fantastic. They handle sibilances incredibly well, and are both silky smooth all around. They also have an incredibly open and big sound, and imperceptible noise floor. The CM640 is a speech mic, so the low end is slightly attenuated, and rolls off at around 80Hz. The CMC5/mk6 was full and absolutely amazing. No surprise there. The Reslo is a bi-directional microphone, so it has an open and live sound. It is also a little compressed, and has a limited frequency response range. Overall, the Reslo had lots of character. Our biggest wow was the fact that the AKG c2000b sounded so good. It sounded a lot like my vintage c414 EB, but sounded less compressed and fuller in body.

And then there were four:

So for round two, these four mics made the cut:

In our second round, we connected all these mics to a four channel rack of SSL VHD mic pre’s, and moved our four remaining mics closer towards our source. After re calibrating everything, we tested them again.

Not surprisingly, both Schoeps sounded great, but the CM640 was too top heavy (or lacked bottom), however you like to out it. The Reslo was fun and sounded great. The c2000b sounded extremely close to the CMC5/mk6 at proximity. The main difference being that the AKG had a texture that the Schoeps really smoothed over, and the AKG also had an audible noise floor which the Schoeps did not.

Then we tried the lot on a Saxophone. Both the AKG and especially the Reslo sounded great, but both Schoeps mics seemed to over emphasis the sound of the reed. The Reslo was really awesome on the sax, it would seem that this mic was perfectly suited for such an instrument.

Next up was a 12 string acoustic guitar. It really sounded great with both Schoeps mics, pretty good with the AKG, but a little muddy with the Reslo. The Reslo still offered an unique sound that could be great for some projects, but in terms of overall clarity and body, the Schoeps mics won hands down.

Since the point of this shootout was to choose a first microphone for a project studio, we decided to put the Schoeps mics away, as well as the Reslo. The Schoeps mics were there more so to act as a control to be able to compare the others to since they are well established as high end mics.

We then took the AKG c2000b and put it through a Vintech 573 mic pre, and then into an API 527 compressor. We did a number of vocal takes with it and were very pleased with the results. Fine warm detail that really had great sonic qualities. These tracks were certainly album quality.

Well, the AKG c2000b sounded the closest to the Schoeps CMC5/mk6 at close proximity. It has a higher noise floor, and does not respond to transients in quite the same way, but it is a very good sounding mic, and is also pretty inexpensive.

Schoeps mics are very expensive, which is why most studios don’t carry them. They also don’t have them because, even though Schoeps mics tend to sound better, clients often want to see big fancy looking microphones like the infamous Neumann u87. Also, it is a lot harder to steal an u87 than it is to steal a tiny pencil mic such as a Schoeps.

The Reslo is awesome, but not very versatile. It was once the SM58 of it’s day, being primarily used for live applications in the 1950s and 1960s. But being bi-directional, I can’t really understand why, because it sounds like a recipe for picking up too much unwanted noise. A great example of this is The Beatles Live at the Hollywood Bowl album. An entire amphitheater of screaming teenagers made for a recording that is difficult to listen to, and difficult to hear what the band was doing! I don’t mean to step on anyone’s toes, but whomever made the decision to use microphones with that pickup pattern for a Beatles performance clearly didn’t know what to expect from their fans. Classic case of not doing your homework. Either way, getting a vintage mic in working order could prove to be problematic, although these mics aren’t uncommon or expensive. But because they are fragile, unbalanced, and don’t operate at normal mic level, a hobbyist may have a hard time using them as they require more care, equipment and knowhow to operate.

Our conclusion was that the AKG c2000b is a really great mic that no studio (big or small) should be without. It beats out all the new microphone manufacturers. It beat out AKGs budget Perception series. It even proved that tried and true gold standards such as the classic c414 aren’t always the best mic for the job. So a really good affordable mic it turned out to be! I would highly recommend getting this mic over a newer manufacturers fancy budget line. In the past 10-15 years we have seen a lot of microphone companies pop up with low priced microphones that include all kinds of gimmicks, such as extravagant design, or claiming to be a clone of some said great microphone from the past. Most of these mics use the very same mass produced capsules, and use cheap overseas assembly and parts, so you are basically just getting an ok mic that will give you that totally awesome and pro Guitar Center grade sound. The c2000b has been part of AKGs standard lineup for a long time, and having seen these in action in professional studios myself, I had no hangups on buying a pair for my own studio, and glad that I did. After doing this shootout, I am even more impressed with this mic, as it had proved to us that microphones made from the standard product line of a well established yet underrated manufacturer such as Austria’s AKG can be the best option around.